The Krobea Asante Technical and Vocational School at Effiduase Asokore in the Sekeyere East District of the Ashanti Region has been shut down temporarily after students went on the rampage on Sunday. 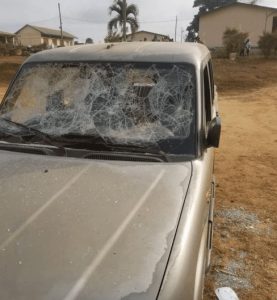 The students caused a power outage and broke into the storerooms of the school and scattered food items.

Although the motive of the disturbances is not clear, authorities say the action could be linked to the dissatisfaction the students expressed about the poor performance of their predecessors in the 2022 end-of-year examination.

The Coordinator of Senior High Schools in the Sekeyere East District, Ebenezer Kwesi Opoku in an interview said, that about 40 students have been picked up by the police for questioning.

“The police have invited about 40 of them for questioning. Unofficially, what we hear from sources is that they are not satisfied with the results of their predecessors. Last Friday, January 20, 2023, the school authorities had a meeting with the P.T.A. and we were told they were not happy, so that is what we have heard that is the immediate cause of the disturbances. We are hoping that the police investigations will unravel any other cause or not,” he said.