The Ministry of Education has directed the Ghana Education Service (GES) to consider alternative disciplinary action instead of dismissal in the case involving the senior high school students who have been dismissed for insulting President Akufo-Addo.

The Ministry, in a statement, said its directive follows the intervention of the President.

In a letter to the parents of the students, the Ghana Education Service (GES) said that the students’ behavior was very bad and didn’t meet the standards of behavior that are expected of any student in Ghana’s educational system.

GES has since admonished the students to use the dismissal as a major turning point in their lives to bring about the desired change in their behaviors.

In an earlier statement, GES apologized to the President on behalf of the school and the students.

“Management of the GES wishes to extend our sincere apology to the President and the general public on behalf of the students and the school,” the statement added.

Meanwhile, the affected students have issued an unqualified apology to the President, asking him to forgive them 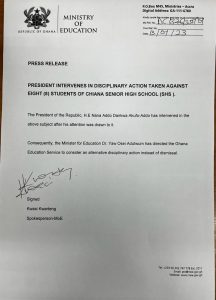