The Western Regional Minister, Kwabena Okyere Darko-Mensah is embarking on a 3-day working visit to some District Assemblies in the region.

The visit is to enable him to familiarize himself with the assembly staff, know their challenges and communicate the plans and resolutions of the Coordinating Council to the District Assemblies for its development.

Mr. Okyere Darko-Mensah, as part of the visit, inspected the ongoing projects undertaking by the government to access the progress of work.

He began the visit at the Shama District Assembly and had a short staff durber.

He urged the technocrats at the assembly to implement policies geared toward promoting private sector.

Furthermore, he told the staff to fastrack the process of issuing permit to business owners. He entreated them to desist from delaying issuing permit to individuals who apply but expedient prompt action to it to attract private investors for development.

The Regional Minister after the durbar paid a courtesy call on the Acting President of Shama Traditional Council, Nana Wienu ll.

Nana Wienu ll, welcoming the Minister, complained over the state of Shama Junction to Shama road and pleaded to the government to fix the road for them.

Mr. Okyere Darko-Mensah responding to the Chief, explained the purpose of his visit as the Chief told him that the government is working to award a contract to a contractor who has the financial capacity and award the contract to him for the construction of the road. 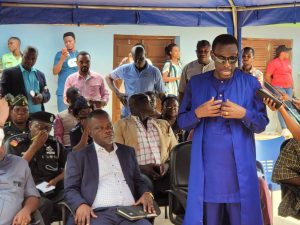 “So l have charged the DCE to get me a contractor with capacity, so we give him the contract forthwith.”

The Minister continued the tour by visiting Roland Rice Factory and inspected how work was progressing in their operations. 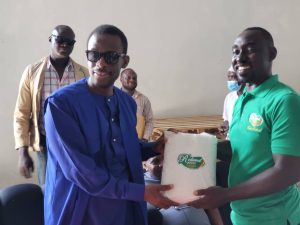 He commended the young CEO for the bold initiative and assured him of government continuous support to enable him to expand operations.

The Minister and his entourage also visited Macro Polo Tiles and Keda Ceremics. 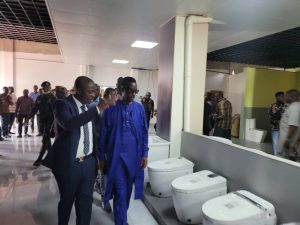 He inspected the progress of work of the phase four project of Keda ceramics.

He commended them for creating employment for the teaming youths in the district and admonished them to make an impact by intensifying their corporate social responsibility.