The immediate past General Secretary of the National Democratic Congress (NDC), Johnson Asiedu Nketiah, popularly known as General Mosquito, has defeated Samuel Ofosu Ampofo to become the new Chairman of the party. 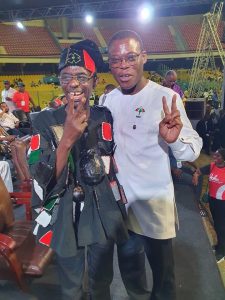 His closest competitor, Samuel Ofosu Ampofo who until this election was the National Chairman of the NDC, polled just 33.81% (2,892 votes) of the total vote cast. Other contenders for the National Chairmanship position were Nii Armah Ashitey and Samuel Yaw Adusei polling 38 and 52 votes respectively.

Read Also: Forgive me if I’ve offended you – Asiedu Nketiah says as he bows out as General Secretary

Johnson Asiedu Nketiah served for 17 years as the General Secretary of the opposition NDC and entered into a fierce battle to be elected National Chairman of the National Democratic Congress.

The National Democratic Congress is getting ready to election a Presidential candidate after the election of National Executives to help wrestle power from the ruling NPP government led by President Akufo Addo.