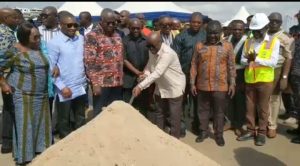 The President, as part of the event also cut the sod for the construction of Oil and Gas Services Terminal and the Prime Meridian Docks Floating Dry Dock and Ship maintenance facility projects.

The projects, is a significant increase of over the existing output, averaged to about 6.3 million tons per annum.

It consists of main terminal superstructure facilities, more than 110,000 square meters of pavement, over 3,000 meters of drains, 33-kiloVolts primary substation and electrical power systems, terminal lighting and water storage systems, crane rails for the main loading and unloading equipment and fully furnished operation’s office building with information technology (I.T.) backbone for the operations of the terminal.

The project has also provided fully automated conveyor systems for the main cargo groups i.e., bauxite, manganese, and clinker (to GHACEM), two modern ship loaders for the handling of export cargo (bauxite and manganese) and an eco-hopper for the imports.

In his address, the President said the projects are interventions that would not only enhance cargo handling at the Port of Takoradi but also improve turnaround time and meet the demands of players in the oil and gas and maritime trade space. 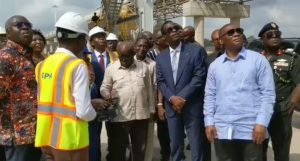 He said since the establishment of the Port by Governor Gordon Guggisberg, in 1920, many transformational activities had been undertaken in partnership with the private sector to make the Port a great asset to the country as well as serving the needs of neighbouring landlock countries.

According to him, his government had an avowed commitment to position the Port as a key growth pole to increase economic activities, ensure growth and development.

He said his government also believe in diversifying the role of the Port from export activities and thus the huge private sector investment and participation to achieve this milestone and solve challenges in the oil and gas space.

President Akufo-Addo noted that, the primacy of the Private sector to spur economic growth had become critical. He appreciated the GPHA for partnering with the businesses to achieve the feat that would advance economic resilience.

The Minister for Transport, Kwaku Ofori Asiamah, addressing the gathering said investment through Public Private Partnership into the Port stood at half a billion dollar since 2014 and had made the Takoradi port a competitive entity not only in the subregion promoting real time maritime activities.

He said the government would continue to create such enabling environment for indigenous business who want to partner government in particular to advance.

The Transport Minister did not mix words in lauding the ingenuity of the Port of Takoradi for buying into the government’s vision which had resulted in the achievement of such huge economically viable and beneficial projects.

The Western Regional Minister, Kwabena Okyere Darko-Mensah, recalled how the President had been committed to the transformation of the Port since his visit in 2018 to the Port of Takoradi.

He was thus enthused that the President was back to commission two new projects and cut sod for two, describing it as phenomenal.

He added that the Port is also estimated to receive some 30,000 tourists in the coming, with a rippling effect on all aspect of the economy.

The Dry bulk terminal had been developed to handle an average of 20 million tons of clunker, manganese, bauxite, limestone, gypsum, petroleum cokes and fertilizers as against the current facility with an existing capacity of 6.3 million tons per annum.

The Atlantic Terminal Services is part of the container and multipurpose terminal concession partnership between GPHA, Ibistek Limited and AFC-equity of the Africa Finance Corporation.

The facility provides a 600-metre quay wall at (-16) water depth along berths with a space of 9.8 hectares.

The Director General of the Ghana Ports and Harbours Authority, Micheal Luguje, said the facilities had the capacities to uplift trade, and provide additional values for shippers.

He expressed his happiness and touched on the earnest need to fix the Western Rail Lines to ensure efficiency of their operations.

Mr. Luguje, praised the government for ICUMS and the paperless activities introduced, which had become a benchmark for other countries to emulate.