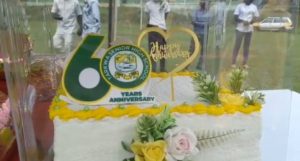 The event, which showcased exploits of TARSCO in the academic arena, educational development, also celebrated pioneers and reflected on school’s future.

The Deputy Minister of Education, Mrs. Gifty Twum-Ampofo, in a speech read on behalf of the Vice President, Dr. Mahamudu Bawumia and Education Minister, Yaw Osei Adutwum, noted that nations throughout the world had realised that education was the most important tool for rapid socio-economic development.

In view of this, she said, government fashioned out the Free SHS programme including TVET at second cycle education.

Mrs Twum-Ampofo said, although the policy programme had been very expensive, taking chunk of the budget, free SHS had increased enrollments in our schools, and provided a lot of opportunities for the youth to enhance themselves, adding “Quality has also improved.

The Coordinator at the Technical Division of Ministry of Finance, Ms. Eva Mends, who chaired the celebration, thanked God for the 60th anniversary of TARSCO and prayed that, her Alma mater would continue to groom and mentor future leaders.

TARSCO, she recalled, provided the discipline that injected a sense of can do spirit in students and that it was unsurprising that old students occupied enviable position in the Ghana’s political and academic space.

Ms. Mends continued that the celebration was a period of stocktaking and generational planning to invest in the future generation of TARSCO and prepare them to be relevant in the fast changing and multi- tasking world of work.

She said “Our school has made remarkable achievements driven by the zeal, direction and the can do spirit of the founding fathers.

Sixty years after the establishment of TARSCO, as part of the transformation narrative to be relevant to the fast-changing times “We must create generational thinkers, who would fashion the vision of our great school based on the philosophy of Alvin Eugene Toffler, that the illiterates of the 21st century will not be those who cannot read and write.

Ms. Mends, an old student in the 1980s, again stated “We need to invest in the future generations to be relevant to the needs of society in the next 60 years — with the creative mentality to appreciate that changing societies is in dire need of intellectuals who can blend theory and practice.

“She challenged future generations of TARSCO to start dreaming about where they want to be by the next Diamond Celebration and also worked “to become household name of excellence and integrity in the education sector of our nation.”

She was happy that TARSCO has positioned itself to be relevant to the challenges of the future in terms of achievement of academic excellence, through discipline and hard work.

TARSCANS, Ms. Mends believed, found themselves to be relevant in the face of Ghana because “we had a dream and made a sacrifice to manifest our dream and that has given us the knowledge and experience to share with future generations.

Achieving academic excellence through discipline for national development, the economist added, showed that guiding posts for the future development of TARSCO, stressing that, “our nation derives immense benefit from the investment and sacrifice that we make—including the parents in particular making for our children.”

She paid tribute to ‘Mother TARSCO’ and the pioneers, who held the ‘torch’ of TARSCO over the years.

The Member of Parliament of Tarkwa-Nsuem who doubles as the Deputy Minister for Lands and Natural Resources, George Mireku-Duker, addressing the gathering said, the NPP government is committed to use education as a bedrock of Ghana’s development. Adding, that the government will therefore continue to open its arms to the provision of the school’s needs.

He told TARSCO faithfuls to help make the school one the best school in the country.

Mr. Mireku-Duker urged the leadership of the TARSCO to be relentless in their efforts to continue imbibing in the student’s discipline that is required in them to excel in their academics.

He therefore entreated all stakeholders of the school to embrace technological advancement to embrace teaching and learning to give the students the feel of real life.

The Headmaster of TARSCO, George Oduro, mentioned that the journey of the school was no mean an achievement and a significant milestone.

He said, the pioneers encountered countless problems as students slept on the floor because there were no beds.

However, Mr. Oduro celebrated “Today, TARSCO has grown to become centre of academic excellence and gigantic tree with about 2,100 students and, 95 teaching and 34 non- teaching.

It has produced over 18,000 prominent men and women of academic prowess who are contributing meaningfully towards socio economic development of Ghana.”

Girls Prefect, Emmanuella Aidoo, stated “Every student is capable of excelling in every subject, which is a measurement of their growth and progress, and environment that helps each other develop intellectual potentials.”