The Deputy Minister for Lands and Natural Resources and Member of Parliament for Tarkwa-Nsueam, George Mireku-Duker has accused his detractors who are scheming to cause massive damage to his personality and reputation for a public ridicule and hatred.

According to him, those detractors have vowed not to stop at anything but to ensure they scandalize, embarrass and reduced his estimation to of right-thinking Ghanaians.

Mr. Mireku-Duker in a press release issued on Saturday, November 12, 2022, disassociated himself over a publication by some online news portal alleging that his bodyguard has been murdered at galamsey site.

He said, “I wish to state emphatically that, I have only one bodyguard, assigned to me by the Republic. My bodyguard, an officer of Ghana Police Service, is alive. I do not have any other bodyguard anywhere, nor have I ever had a bodyguard with such name in the said publication. The publication going round is not only misleading and fake but defamatory, as my detractors will not stop at anything just to tarnish my hard-won image.”

“In their scheme to cause massive damage to me, they have linked a person whom I have no connections with whatsoever with intent to subject me to public ridicule and hatred, reduce my estimation in the eyes of right-thinking members of the public, scandalize and embarrass me beyond measure.”

He urged the public to disregard the publication since he does not have any association with the said alleged person nor do have a bodyguard bearing such name.

Hon. Mireku-Duker therefore advised the media houses that has published the news to withdraw the publication and apologize or face prosecution.

Read below the press release: 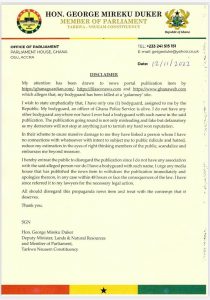