The Member of Parliament for Sekondi, Andrew Agyapa Mercer on yesterday Tuesday November 8, 2022, failed to honour the invitation extended to him to render account to his constituents since his election in 2016. 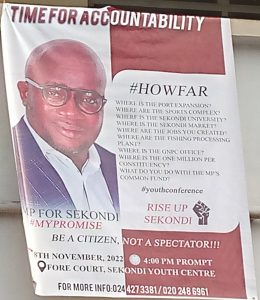 A pressure group, ‘Rise Up Sekondi’, organised a programme dubbed “Time for Accountability”.

The programme was to give the MP the platform to account to his constituents who voted for him to represent them in Parliament.

Speaking in an interview with the Chairman of Rise Up Sekondi, Nana Amakye, said that they extended an invitation to the MP and copied the party as well as the Chairman of the Council of Elders.

The letter was said to have been delivered to the mother of the MP, which was later confirmed by the mother that Mr. Agyapa Mercer has received the letter.

He explained that the letter was delivered to the MP’s mother because he does not have an office in Sekondi and that was the only channel to have delivered the letter to him.

Since the day the letter was sent and the confirmation of its delivery by the mother, the MP has never engaged us as organizers to inform us whether he will be able to attend the programme or not to enable us to make a decision to either reschedule or continue with the programme.

“He promised to expand the port in Sekondi (Fishing Hobour), construct fish processing plant for the fisher folks in Sekondi, bring GNPC office in Sekondi, build a University in Sekondi, Renovate the deadly trapped Sekondi Market among others.”

According to him, it was based on these promises, they voted for him, adding that they thought the promises when delivered will revamp the city.

The Public Relations Officer of Rise Up Sekondi who doubles as Assembly member of Asamansidu Electoral Area in Sekondi, Osuman Ibrahim Alias Sansiro, on his part registered his displeasure over the failure of the MP to honour the invitation of his constituents to account to them after given them the nod to represent them in Parliament after 6 years in office as Member of Parliament for Sekondi.

According to him, the MP has shown to the entire constituents that he has failed to carry the task given to him by the people of Sekondi.

He demanded that the MP should come and render account to them as to how he has been using his common fund to develop Sekondi and its people.

Sansiro said they are not going to allow themselves to be insulted again. When political parties normally make a statement in their stronghold that even when the party present a ‘Goat’ people will vote for the goat because it is representing the party.

He continued that the situation will be different because they will slaughter the goat for a delicious soup when presented to them in the election year.