A 42-year-old man, Dominic Adu Boi, has been arrested for drying his harvested cocoa beans on a tarred road at Ntobroso in the Atwima Mponua District of the Ashanti Region. 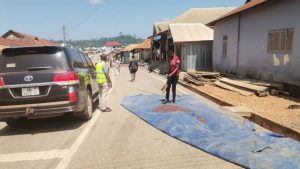 According to information available to Ghananest.com, Ashanti Regional Minister, Hon. Simon Osei Mensah, ordered the arrest of the man after he had embarked on exercise to inspect the Sino-Hydro road project at Nyinahin.

The minister in an interview, indicated that he saw Dominic Adu Boi, drying up his cocoa beans on a section of the road at Ntobroso. So, he called the owner and asked him not to dry the beans on the road but he refused to heed to his advice.

Read Also: Prices of fuel likely to go down next week – COPEC

So, I have to order for his arrest and he was arrested and sent to Kumasi Central Police Command for further interrogation.